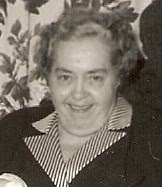 Exactly 50 years ago today, on Friday, July 13, 1962, Gertrude Ellen O'Neill (nee Foley), my grandmother, passed away in Toronto, Ontario.
'Gertie', as her husband J. Graham O'Neill always called her, was born in 1898. The exact date of her birth is somewhat of a mystery. The baptismal register for St. Joseph's Roman Catholic Church in Toronto, signed by a Father McEntee, does not list a date of birth but rather lists her date of baptism as March 16th. The civil registration (available through Ancestry.ca), signed by her father John Foley , lists the date of birth as April 16th but the genealogical extract, prepared by the Office of the Registrar-General in Ontario for me in 1985, again lists March 16th. Her marriage registration, death registration, obituary and gravestone do not list a date of birth at all. John Foley was reputed to be illiterate, but had been taught to sign his name for business purposes, and may not have fully recognized the error in the information he was attesting.
Gertrude's mother, Mary Jane (nee Fitzgerald) Foley, died a few days after Gertrude, or "Nana" as I knew her, turned one year of age. Four years later, John Foley re-married, this time to Annie McElroy. It appears that life was good for Gertrude and her brothers Gerald and Clarence as their father's contracting business flourished. They lived in the largest house on their street and when Gertrude married my grandfather in 1926, the wedding gift from her father was a house that she actually turned down, convincing her father to provide the house instead to her new in-laws, William and Margaret O'Neill. Later, after the deaths of both William and Margaret, the house came back to Gertrude and her husband Graham. It then became my parent's home and thus the house in which I was raised.
Gertrude had numerous medical problems including diabetes, a heart condition, and near the end, likely cancer. Conveniently, my mother was a registered nurse and we lived two doors away, which in Toronto's east end meant our front door was about forty feet away from Gertrude and Graham's front door so my mother made at least daily visits to administer her mother's insulin injections. It was very convenient as well for me as Gertrude's first and eldest grandchild and therefore the 'one who could do no wrong.'
On Friday, July 13, 1962, I was in the kitchen of my best friend Bob Dobson's house, directly across the street from my house, when my mother returned from the hospital. My friend Bob heard the news first. He stopped, looked at me and asked if I had heard. I hadn't heard anything but then immediately heard my mother calling across the street, explaining to Bob's parents, Eunice and Jack Dobson who sat on their front porch, that 'Nana' had died.
Some family memories are indelible.
The URL for this post is: http://ianhaddenfamilyhistory.blogspot.ca/2012/07/gertrude-ellen-foley-oneill.html
Posted by Unknown at 8:36 AM