I don't 'celebrate' Halloween as I once did. It is a day for the kids. I'm older and my children have all left the nest. I don't remember ever attending an adult Halloween party, the gatherings of adults harkening back their fun times as children dressing up but now with candy typically replaced with adult beverages and costumes developed mindfully for an unspoken contest of creativity and provocation.

But I do have great memories of Halloweens gone by, both as a kid myself and then, years later, with my own children.

There were the pumpkins to carve, an opportunity to show your children your knife skills, or at least pretend that you possessed those skills. The carving challenge for me was to try an replicate what I watched my own father do with a pumpkin annually. I never possessed the artistic talent of my father so my carved pumpkins had faces that were simplified versions of those that adorned my parental home. For my late wife, Karen, the carving meant there were pumpkin seeds to roast, a tasty treat I never could quite appreciate as she, and I think the kids, did. 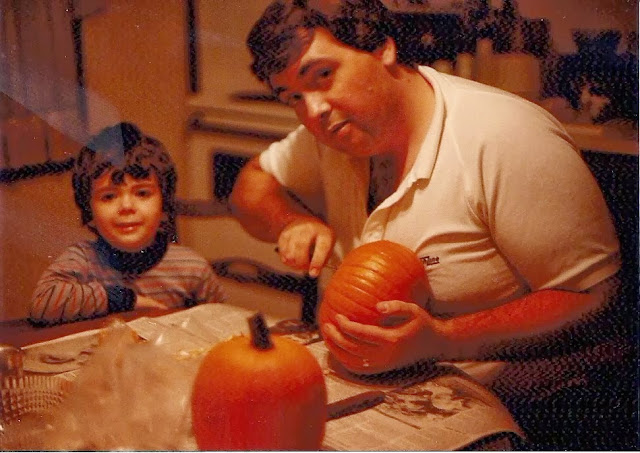 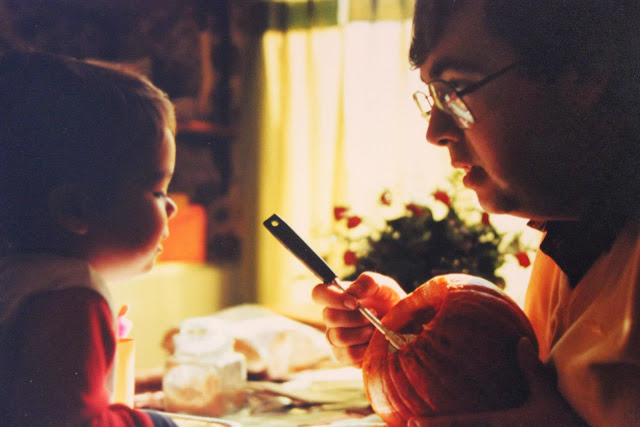 And of course, the kids needed costumes. In our house, we stayed away from the plastic store bought variety, opting to make our own. Well, at least my late wife Karen did the making of costumes, knowing that fashion was never one of my strong suits. In 1988, it was a giraffe, a princess and an ewok that left our house in search of treats. 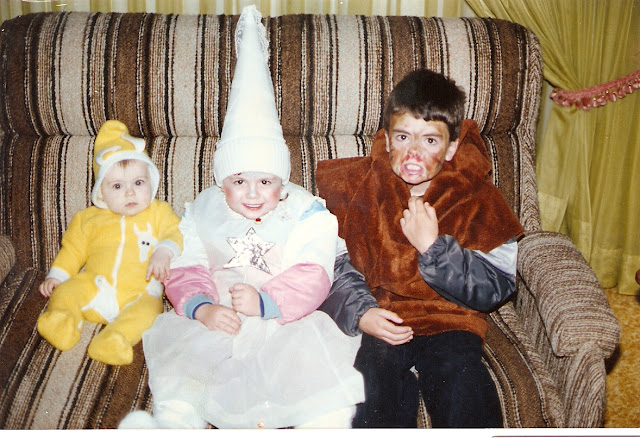 Posted by Unknown at 10:16 AM No comments: Links to this post

My Work Life Chronicled In A Novel

A friend and former work colleague, now author, Stephen Lonsdale informed me through Facebook that his newest novel Inside Looking Out was now available on Amazon.com. (It's currently on sale for only $9.96, a bit cheaper than the low price I paid a couple of weeks ago). 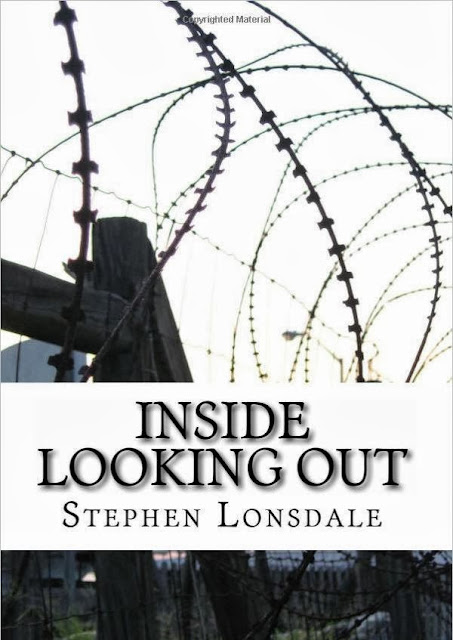 While I have posted a lot of information about ancestors, I have shied away from posting the story of me. As a genealogist, I have trained myself to look for and analyze records left by and about family members. A fictional novel is not the place to seek out information.

But now, Stephen's novel Inside Looking Out tells the stories of the early years of my professional career with the provincial government in Ontario, Canada. Inside Looking Out is the author's semi-autobiographical account of his entry into the world of Corrections, the significant impacts that world had on his life, and the winding journey that brought him to where he is today. Inside Looking Out chronicles the first few years of my public service career as I shared many parts of Stephen's journey and was present for some of the frightening, even traumatic, events that are recounted.

I began my career as a correctional officer. It wasn't my first choice of jobs and I knew it was a disappointment to my parents. Having been the first of my family to graduate from university, my parents had much higher expectations than to brag about their son the jail guard. But I needed a job as the one I had at the time was winding down. I had my sights set on becoming a probation officer, a position that required the university credential. In order to access the probation jobs, I needed to get a position, any position, in the Corrections department. My late wife Karen and I had only been married two years but had purchased our first house and I needed a secure job to make the mortgage payments. The position paid $6.67 per hour plus benefits to start. Karen and I were thrilled with our good fortune. What I didn't know is that I got the job as a Correctional Officer in one of the most dangerous institutions in Canada! And that is where I met Stephen Lonsdale.

Although the names of the people have been changed in Inside Looking Out, I recognized many of the characters. I know the real names. For example, David Evans, the novel's protagonist, was hired to be a Correctional Officer by the institution's administrator Iain Wallace, accurately described as a bombastic, old Scotsman. That same administrator hired me after first confirming that based on my name, I was also Scottish. You can see how family history played a key role in my life.

I was present and witnessed many of the events that the author writes about in Inside Looking Out. Those of us who shared in those incidents and worked in that institution at that time know the true identities of the novel's characters and we can attest to the accuracy of the stories told. It was a tough work life and one that I wasn't permitted to speak about at home because it frightened my wife to know about the environment I left our happy home to work in each day.

I worked hard in my Corrections career and over the course of time, I was eventually promoted to the position of Superintendent - the equivalent of a Warden in the United States or a Governor in the United Kingdom. I left Corrections many years ago for family reasons and thoroughly enjoyed working in other areas of the provincial government. But, I am most proud of leading the redesign and introduction of a new (and still current) uniform worn by the province's Correctional Officers. I was also the first to wear a Superintendent's uniform in the history of the province (as far as I know).

If you are looking for a really good book to read, I recommend going over to Amazon.com and doing a search for Stephen Lonsdale to purchase Inside Looking Out or one of Stephen's other books like Badon. You may also want to look differently at novels in the future when you are researching your family history. I know I will.
Posted by Unknown at 10:40 AM No comments: Links to this post

For the past several decades many of us were lined up at school to have an annual 'school' photo taken. Sometime later, the photo packages with an assortment of different sized photos were handed out along with the instructions to take the photos home, show our parents, and if the photos were wanted, parents could pay to keep them.

If you're like me, and my children after me, the photos were considered to be somewhat of an embarrassment but to my Mom, they were delightful and of course, they were paid for, kept and then stored in a nondescript cardboard box tucked on a shelf in my parent's bedroom.

I don't have the 'full collection' of my school photos but managed to retain a few, and make digital copies of them , covering several years.

Recently, many genealogists on Facebook shared their high school graduation photos. It got me to thinking about how these school photos over the years document the journey of our growing years. They also speak volumes about the times we grew up in particularly, I think in my case, the hairstyle, or lack thereof.

Here is how those school photos documented me: 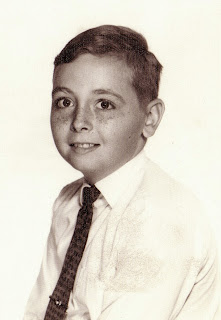 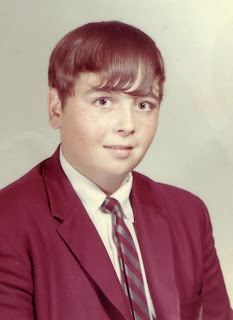 High School - Grade 10 in 1969 (the cut back area on the left side of my hair was caused by doctors who cut my hair in order to stitch a cut caused by stopping a hockey puck during a game. I was the goalie on the team.) 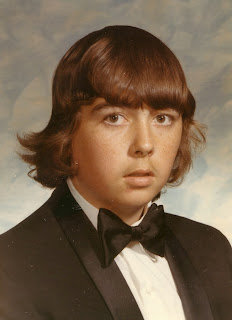 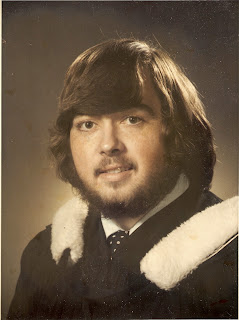 Graduation from the University of Toronto in 1976 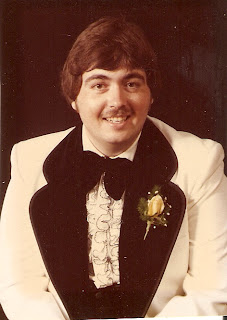 While this is not a school photo, it is part of the journey. My wedding day photo in 1977, for which I tried to clean myself up a bit, when I married my late wife Karen Benedetto.

What about you? Do you still have your school photos? Are you happy with them or do you still think they are a bit of an embarrassment?
Posted by Unknown at 10:40 AM 1 comment: Links to this post