Santa Claus Is Coming To Town!

Tonight's the big night for all of us kids!
Christmas Eve in my parental home involved a mandatory bath followed by dressing in new pajamas before placing our Christmas stockings (large red felt socks) on the living room, and later recreation room, sofa. Each year was of course marked by a trip to see Santa and share with him what we wanted for Christmas, and to pose for a photo.
Below, my sister, my brother and I are pictured with Santa. I guess the photo to be from about 1964 based on our apparent ages. I love the galoshes we were required to wear as well as my Davy Crockett 'bulky-knit' sweater, made by our mother, and especially becoming with the wool 'fringe' adorning each arm! 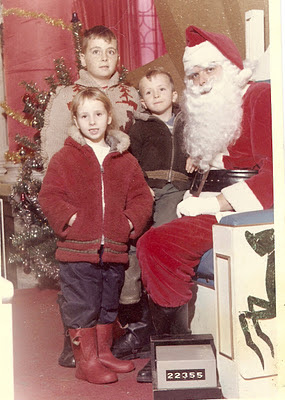 Posted by Unknown at 3:33 PM 2 comments: Links to this post 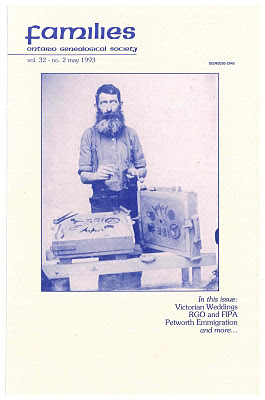 Platt S. Miller married Catherine Kimmerly on New Year's Day in 1854. The marriage took place in Napanee, Lennox and Addington County, in what is now the Province of Ontario, Canada. Catharine was my wife Ellen's first cousin, four times removed.
Although I had information about Platt and Catherine, Platt again came to my attention when I discovered his photo on the cover of the Ontario Genealogical Society's quarterly magazine, Families, Vol. 32, No. 2 (pictured to the right) from May 1993, while I was doing some volunteer proofreading work for the OGS.
This find was a stroke of luck! Although the information about the cover photo of Platt is not sourced, it nonetheless provides several leads about Platt, Catharine and their family. The following is the information provided about Platt and his photo:
"This photograph of Platt S. Miller, metal moulder, shown with the tools of his trade, comes to us from Margaret Jane Snider of Ocean Springs, MS.
Platt S. Miller was born in Napanee, Canada West, on 17 December 1830. He was the son of Garrett Miller, tailor, and Eleanor Wright.
Platt married Catherine Kimmerly on 1 January 1854 in Napanee. Their known children are: Margaret A. Eleanor, born 20 Novemeber 1854; Henry, born c.1856; George Maitland, born c.1860; Alice Felindann, born 5 May 1862 in Napanee; Catherine Adelaide; Francis Augustus; Aseneth, died at 6 or 7 years.
Platt and Catherine lived in Napanee through the 1860s then moved to the village of Almont, township of Almont, Lapeer County, Michigan, where Platt worked at the Lockhurd Foundry.
Catherine Kimmerly was born 1 July 1828/9 in Canada West, the daughter of Henry Kimmerly and Margaret Fretz, and the granddaughter of Andrew Kimmerly, UEL. She died 25 October 1906.
Platt S. Miller died 24 September 1900 in Almont and was buried there in the Ferson cemetery with his wife.
The original of this photo is a tintype, and is unusual in that Mr. Miller is pictured in his work clothes and with his tools. People of that period are usually photographed in their finery, so this picture is to be valued."
Platt and Catherine can be found living in Almont in the 1870, 1880, and 1900 US Federal Census records. In 1900, they reported that they had nine children but that only four were still living at the time. Thus far, I have been able to find eight of the nine children. More work is obviously need to track down their missing child.
The collection of Families can be found in the 'Members Only' section of the Ontario Genealogical Society's website at http://www.ogs.on.ca/.
Posted by Unknown at 10:26 PM No comments: Links to this post

My Cousin Was A Hero! 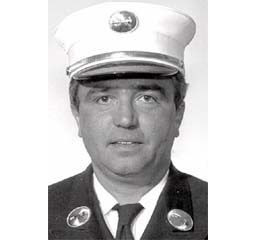 Until this past week when I was contacted through a "new cousin connection" who had read about our family in this blog, I didn't know that I had a cousin, a second cousin once removed to be exact, who had died a hero! In my last couple of posts, I have recounted the new 'cousin' connection. One of the many bits of new information passed on to me was about another cousin, Lt. Michael Warchola (pictured to the right) of the New York City Fire Department. Michael's great grandmother was Agnes (nee Sweeney) Mitchell Branchfield, my second great grandmother.
Michael, or 'Mike' as he was known, was born, raised, and lived his life in New York City. Like his older brother, Dennis, Michael joined the NYFD. Just two shifts before his retirement, the paperwork completed, Michael died saving the lives of others on September 11, 2001 at the World Trade Centre.
The events of that horrific day are indelibly marked in my mind as is the case with most of us. Yet, from the relative safety of my office in Canada, it was too easy to feel somewhat distant and removed, after all, I really didn't know anyone in New York City. Now, learning that a cousin, one of my cousins, was there and that he died saving the lives of others in his role as a 'first responder', a role he undoubtedly loved and worked hard at, makes the tragedy of the day hit 'home' that much harder.
I never met Michael but wish I had had the chance. I have learned from a number of tributes posted about Michael that he enjoyed history, especially stories of the strange and bizarre, a passion reputed to have developed from reading British tabloid newspapers at his grandmother's house. Michael was a Golden Gloves boxing champion who went to university in Buffalo around the same time I was in university in Toronto, just a 90-minute drive away. Mike and I both graduated from university in 1976 and, in 1977, after years spent on the waiting list, Mike joined the New York Fire Department.
On Tuesday, September 11, 2001, Lt. Michael Warchola led his crew from Ladder Company 5 into the 'B' stairwell of the North Tower at the World Trade Centre. On the 12th floor, he stopped to help a young woman who was experiencing chest pains. When the call went out to the emergency responders to evacuate the building, Michael was seen by other firefighters still tending to the woman, promising that he would soon also evacuate.
After the collapse of the building around him, Michael was heard over the radio, "Mayday, mayday, mayday. This is Ladder Company 5, mayday. We're in the B stairwell, 12th floor. I'm trapped, and I'm hurt bad." Michael was able to call out two additional maydays but his would-be rescuers were unable to reach him due to impassable debris.
Michael's body was recovered on Friday, September 14, 2001 and was carried out of the rubble by surviving members of Ladder Company 5. The world had lost a hero!
Posted by Unknown at 12:01 PM 1 comment: Links to this post

The Connection Has Been Made!

In my last post, I recounted two "anonymous" comments that had recently been left for me on a May 2011 posting about William Mitchell's disappearance or perhaps, his abandonment for whatever reason of his family sometime in the mid-1890's. Both of the comments indicated that William's wife, Agnes Sweeney, my second great grandmother, had taken in a little girl named Mary Lafferty and raised her as her own. By the time this had occurred, Agnes had re-married to Joseph Branchfield and so little Mary was essentially raised as a Branchfield family member.
I concluded the last post by requesting that those who had left the comments to please contact me. I'm happy to report that Marie and Helen, daughters of Mary Lafferty Branchfield have contacted me and the information that they have begun to share is also pouring in (more about some of the discoveries and surprises provided so far will be shared in future posts).
Needless to say, I am thrilled to have been able to connect with these new 'cousins.' Although neither knew my second great grandmother (as Agnes passed away in 1928), they did know Agnes' children well as their aunts and uncles. I'm certain to learn much more about these family members who until now had only been names on records and in my database.
This branch of the family (my father's maternal line) moved from Scotland to the United States many years ago. While I always have wondered about the hardship of immigration that my ancestors experienced, particularly leaving family behind, usually knowing they would never again be seen, I continue to be amazed that we cousins could be living so close together and yet not know it. Just as I am amazed, based on the information about members of this family branch, about family resemblances, talents, and choices of employment that seem to run inexplicably through the family.
So thank you to Marie and Helen for reaching out and if there are more Branchfields out there, I'm waiting to hear from you too!
Posted by Unknown at 8:11 PM 1 comment: Links to this post