I was fascinated this past week by a comment left on an older blog post (May 2011) by Patricia. The blog post detailed the 'disappearance' of my great great grandfather William Mitchell sometime in 1890's, essentially his abandonment of his family.
Patricia shared through her comment that my great great grandmother, Agnes (nee Sweeney) Mitchell Branchfield, had taken in her grandmother Mary Lafferty and raised her as her own. According to Patricia's comment, Mary referred to Agnes as her mother and to Agnes' children as her siblings. Clearly signs of very close relationships and most understandable given what must have been the circumstances.
Unfortunately, the 1911 Scottish Census, the most recent made public, does not show Mary Lafferty living with Agnes and her family. In 1911, Agnes was residing at 3 Harvie Lane in Greenock, Renfrewshire, Scotland with her second husband Joseph Branchfield and their five children and two children from Agnes' first marriage (listed as step-sons to Joseph). On the census record, 3 Harvie Lane is listed as a "Common Lodging House," containing 13 rooms with windows and providing a home to 36 people. The most likely Mary Lafferty that I have found in 1911 Greenock was born around 1908 and whom might have become orphaned around 1918.
Common lodging houses were not the abode for the rich and famous and were often of significant concern for health and criminal activity issues in the 19th century United Kingdom. So my great great grandmother did not lead a life of luxury but more likely faced a daily struggle to make ends meet and keep her family intact. Joseph, her husband, at least worked, like most men in the area, at the nearby shipyards where he was employed as a labourer.
Unfortunately, it does not appear that 3 Harvie Lane exists any longer, likely having given way to some form of Greenock modernization. So Patricia, if you are reading this post, please contact me with more information at ianhaddenfamilyhistory@gmail.com.
Posted by Unknown at 3:34 PM 1 comment: Links to this post

My great great grandfather John Gaull had eleven children. He was one of seven children born to Mary Jane Gaull. With that level of proliferation, I shouldn't be surprised that I would have many Gaull family cousins and relations. I've had the great fortune to not only make a connection with a number of my Gaull cousins but also to spend some time with a couple of them. Still, I am thrilled that I have made another connection within the family.
I was recently contacted by Robert Stables, a second cousin twice removed. Robert is the great grandson of Mary Jane. I was also subsequently contacted by Sandra Stables, Robert's sister-in-law, wife of Robert's brother Alan. In addition to the excitement of the new connections, Sandra, who has been doing some family history research, provided me with photos!
Never before had I seen the grave and headstone of Mary Jane, who died in 1925 and is buried in the Cluny Cemetery, Cluny, Aberdeenshire, Scotland along with her son James who died in 1919. 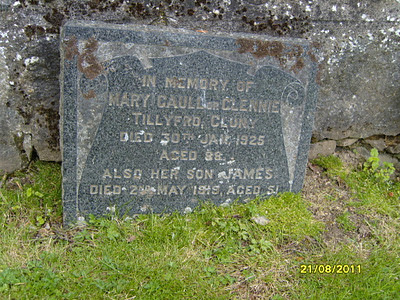 The generational difference between Robert, Alan and I is easily explained. While we share Mary Jane Gaull as our common ancestor, I am descended from Mary Jane's eldest son John Gaull (born 1860) and Robert and Alan are descended from Mary Jane's youngest son John Glennie (born 1873). The age difference is expanded again as I am descended from John Gaull's eldest daughter, Jessie McKenzie Gaull, while Robert and Alan descend from John Glennie's second youngest daughter, Elsie Ann Glennie who was born just a couple of years earlier than my father.
In addition to the headstone photos that Sandra sent to me, I received the wonderful photo of Tillyfro (below), the farm in Cluny that was the home of Mary Jane Gaull and her husband Alexander Glennie. There really something about seeing an ancestral home and being able to imagine your ancestors walking the property and working the fields. I have read the name 'Tillyfro' on many family records over the past 30 years but seeing it is such a bonus! 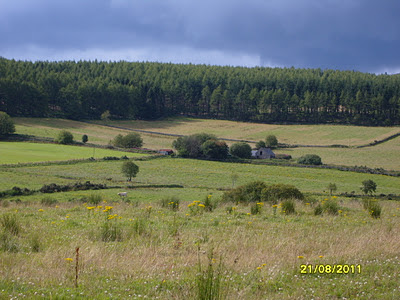 (Photos provided by Sandra Stables, copyright 2011. Used with permission)
Posted by Unknown at 10:03 AM No comments: Links to this post 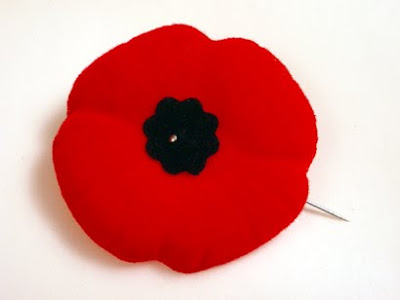 Lt. Col. John McRae was born in Guelph, Ontario, Canada in 1872. On May 3rd, 1915, he penned one of the most famous of World War I poems, 'In Flanders Field,' commemorating forever the bravery of those who fought and paid the ultimate sacrifice. Sadly, McRae, a physician, died of pneumonia in France in 1918.
Since 1922, the poppy has been worn by thousands of Canadians in tribute to our fallen heroes. Initially the poppy campaign provided a source of employment and income for those who had fought in the Great War. Today, the annual campaign funds programs for veterans through the Royal Canadian Legion.
On May 17, 1916, young Jimmy Gammie, my great granduncle, left his farm to enlist in the Canadian Expeditionary Force. Maybe he had seen the posters stating, "Your Chums are Fighting, Why Aren't You?" All of 5 feet, 8 inches in height, Jimmy, who joined with his brother Peter, would fight in France with the 46th Battalion. He would know what it was like to hear bullets whistle as they closely passed, he would know the sound and vibrations of bombs exploding, he would know the pain of being wounded, and after recovering, he would know the fear of returning to the front lines. He would know dieing for his country. Jimmy never returned to his farm, there was no repatriation ceremony for him.
Jimmy's grave, pictured below, marked for all to remember him. 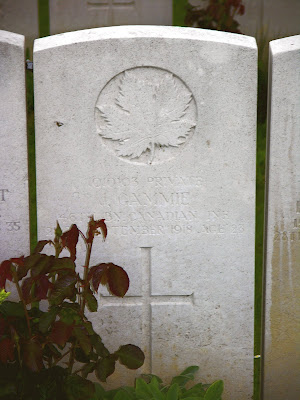 Jimmy is buried in France, not in Flanders Field but in the Bucquoy Road Cemetery, near Arras, with too many of his comrades, not far from the bridge he was fighting to gain. 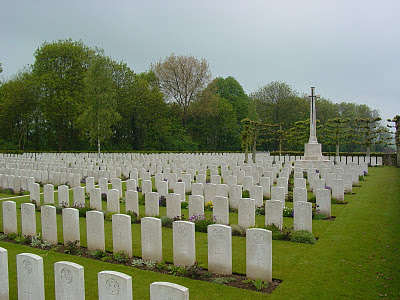 James Little Triggs was even younger, only 15 years of age and just under 5 feet in height, when he and his twin brother Phillip, followed in their father's footsteps and joined the Royal Navy as cabin boys. On May 31, 1916, James didn't see the shells coming, as he toiled away below deck, that would sink his mighty battleship and end his young life.
Today at the eleventh hour of the eleventh day of the eleventh month, we remember them along with those who did survive but who have had lives filled with memories of the terrors of war. And we remember those still fighting and sacrificing their lives in the name of freedom.
Posted by Unknown at 8:00 AM 2 comments: Links to this post

A Story Debunked - The Case of Margaret (Graham) O'Neill 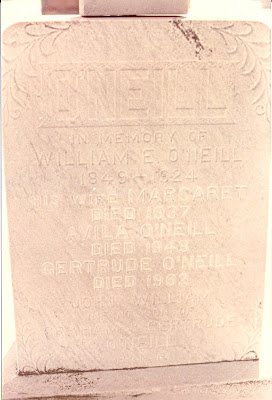 Margaret Graham was born on September 5, 1854 in Canada West (previously Upper Canada and now the province of Ontario). As her birth was before civil registration commenced and as I have not yet checked the Roman Catholic records for area churches, I suspect her birth occurred in Simcoe County, north of Toronto as that is where the Graham family can be found in subsequent Canadian census returns.
Margaret was a student at the school in Holland Landing, Ontario when she was 6 years old according to the 1861 Canada Census. Her father, Patrick was a tailor from Ireland who had met and married her mother Catherine in Ontario. By 1871, the family had moved a bit further north in the province, settling in Sunnidale, Simcoe County, Ontario. It seems that by 1890, Margaret had had enough of life in mainly rural area in which she lived and so she she headed south to the city of Toronto.
It was here that met and on June 4th, 1894, she married William Emmett O'Neill. According to their marriage registration, neither had been previously married. I mention this fact as they married a little later in life than most. William was 42 years old and Margaret was 38. Oh, how their lives must have changed when over the course of the next four years, Margaret gave birth to a son (my grandfather John Graham O'Neill) and two daughters (Kathleen and Avila).
Although the family resided primarily in the west end of Toronto, they eventually moved to a house they purchased from their son's future father-in-law, John Foley, at 189 Pickering Street in the city's east end. This is where a family story passed on to me from my mother begins and now ends.
The house at 189 Pickering was not only lived in by my great grandparents through the 1920's and 1930's but was passed on through the family eventually becoming my parent's first home when they married in 1953. The house is small by today's standards, a two bedroom semi-detached home that was functional but could be cramped at times. According to my mother, Margaret (Graham) O'Neill died in the 'master,' front bedroom of 189 Pickering Street in 1937. When I lived in the house the story didn't really bother me but later in life, as I began documenting my family's histroy, I thought it a little creepy that I might have conceived in the very room that my great grandmother died in.
But she didn't! As a result of re-checking databases (in this case the Ontario death records on Ancestry), I found Margaret's death certificate. Margaret died on March 2, 1937 at St. Joseph's Hospital of chronic heart problems, a long way from my first home on Pickering Street. In fact, according to Avila O'Neill, who was the informant listed on the certificate, Margaret and Avila were residing together at 1739 Dundas Street West prior to Margaret's hospitalization. The funeral arrangements were made through Ryan and Son Undertakers on Dundas Street West and Margaret was buried alongside her husband William in Mount Hope Cemetery in Toronto on March 5, 1937.
A 'creepy' family story debunked and a lesson to re-check already mined databases learned!
Posted by Unknown at 11:52 AM No comments: Links to this post