The End Of An Era For A 'Family' Church

The end is drawing close. 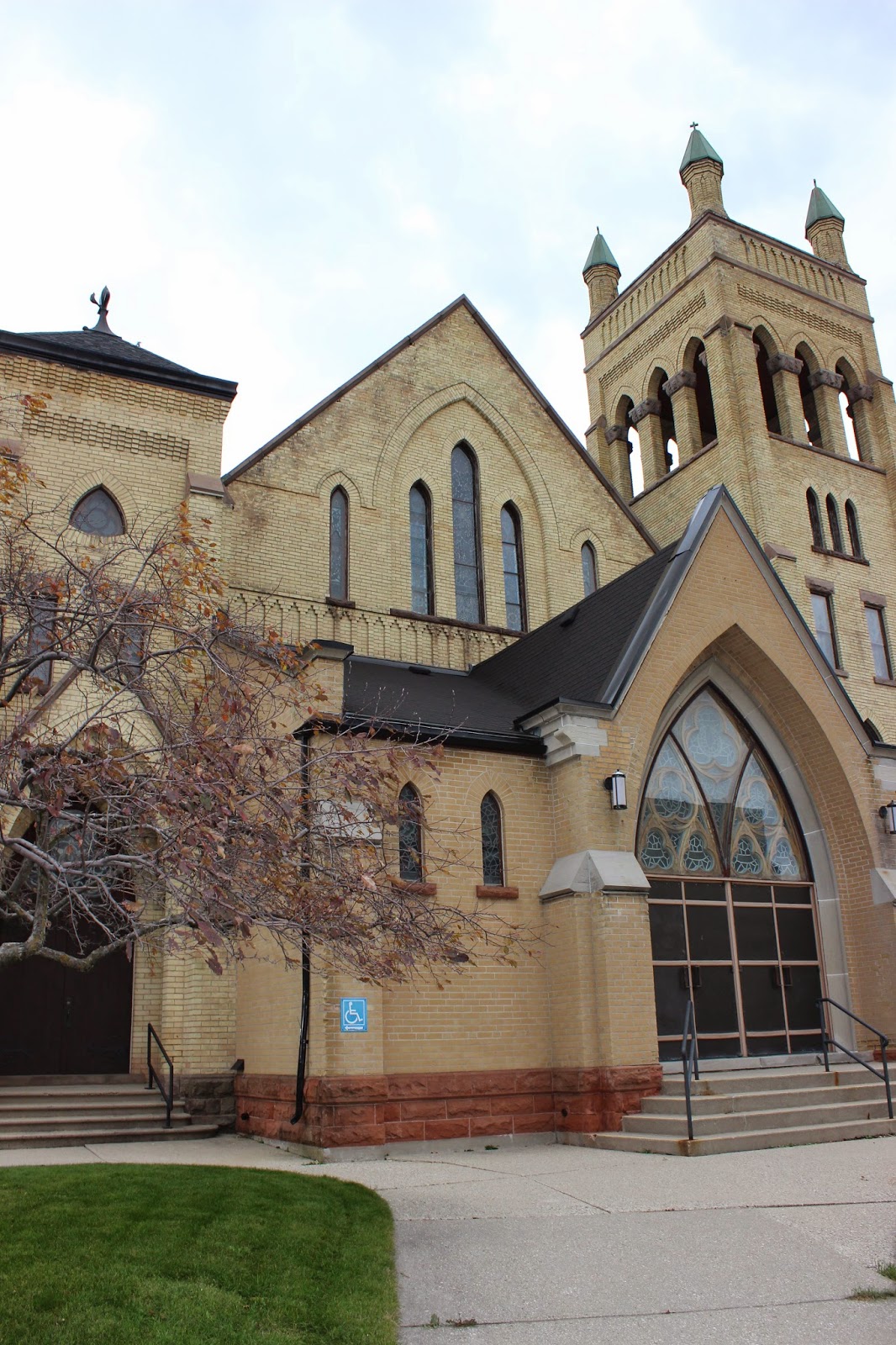 The Evangelical Association was basically a German Methodist church that eventually merged with the United Church of Canada. Sadly, the decline in the number of parishioners and attendance, down to 25% of what it was forty years ago, means that the church's operating costs are much higher than it's revenue. So, the church has been sold. Fortunately it's exterior is protected under the Ontario Heritage Act.

For my wife's Wagner ancestors, this church played a central role in their lives dating back more than 150 years.

Third great grandfather Jacob Hailer was instrumental in helping to establish a church for what was then the Evangelical Association. He allowed his workshop to be used as the first church Sunday School. He also permitted the traveling Evangelical Association ministers to stay in his home when they visited the then village of Berlin, Canada West.

One of those itinerant ministers, Jacob Wagner married Jacob's eldest daughter Margaret in 1849. Their eldest son, Louis Henry Wagner, my wife's great grandfather, would follow in his father's foot steps, become a minister, and eventually pastor of the Zion Evangelical Church.

Margaret's sister, Catherine married Jacob's best friend Louis Breithaupt in 1853 and, as their family grew to prominence in the growing community of Berlin, they too centered their lives around Zion Evangelical Church.

When Margaret died in 1918 (shortly after Berlin was re-named as Kitchener), her son Louis as church pastor used the church's stationery to pen a poem in tribute to his mother.

Zion Evangelical Church stationery used by Rev. Louis Henry Wagner to author a tribute poem to his mother Margaret Hailer Wagner Bean on her death in 1918. (Note that the church address at the time was 10 Weber Street (now 32 Weber Street) and that the central steeple of the church is now missing)


Memories of Our Mother


Our Mother's gone.
The fields, from which she gleaned
The fallen stock of golden grain
Have long since given their ripened store
To other hands. The orchard, bright in bloom,
And promise of a full supply,
Will yield its burdened bough to others
Will these too be as generous with their gifts
As she was want to be?
Or withholding much, impoverish but themselves?
Her home, where, through these many years
Of saddened widowhood,
She reigned serenely well,
--- Her word was law,
Respected every wish ---
That home, of daughters well brought up,
And sons much loved and honored true,
Will miss the mother's smile.
Her gentle words of caution and of love
Will n'er be heard again.
Her voice is gone. Her hand,
So warm to welcome home,Will never give its kindly hold
To those she loved so well.

The stranger, made a noble friend,
Will miss her cordial help.
Her church has long since ceased
To see her in her wanted place;
But when the ring of bell will call to worship here,
Her memory still continues fresh and sweet
And long to come, when we
And here this house of God have passed away,
She still will linger on in hallowed thought.

Our Mother's gone? No. Never.
Her disembodied spirit may linger near,
And still its good unfold.
Her smiles, her words, her loving deeds
Will never pass away.
She lives. Though to its place
We lay her washed frame, she lives.
Our Mother lives, and loves us still.
And when this sad requiem is o'er,
And each his weary way
To distant home we break,
The memory of our mother dear will linger.
Her soothing hand will still be laid on throbbing brow.
Her smile will cheer the lonely heart.

They were best friends.

Two kids from Longford Mills, Ontario. That's where they met, likely sometime around 1910, when they were both in their early teens.

Alex and Carl were always up for adventure. Friday, October 1, 1915 was to be the start of their greatest adventure. They were going to defeat the army of the German Kaiser.

Alex was Alexander Smith Morton whom the records show was a couple of years older and a couple of inches shorter than his best friend Carl. Alex, born on May 21, 1895, was 20-years old on that Friday in 1915 at the volunteer enlistment centre in Toronto, Ontario. Carl, whose birth name is recorded as William Carl Filkin, born March 14, 1897, was the eldest son of William Mark Filkin and his wife Alma Maud Armstrong.

Alex and Carl joined the Canadian Expeditionary Force, although, perhaps neither could understand why they just didn't call it 'the army.' They were among the 640,000 Canadians who would serve King and Country in The Great War.

As privates, Carl and Alex first trained in Toronto before being shipped to England in April 1916 for further training. Once in England, they were both first transferred as reinforcements to the 15th Battalion, a unit of the Toronto 48th Highlanders.

Finally, around the middle of September 1916, they went on their last great adventure together; they went to war in France. They joined the British-led Battle of Arras.

I suspect that their weeks in the trenches of France were not quite the adventure they thought they had signed on for.

Wet, muddy, cold and terrifying. This was not drill work anymore. Real bullets were being shot at them. Real bombs were exploding near them. Real soldiers, young men just like them, on both sides of the battle line, were dying in front of them, the screams keeping them awake at night.

Then on October 28, 1916, Alex was hit. As Carl would later write to Alex's brother Robert, "Alex was hit with a piece of shrapnel in the right arm and the missile pierced his chest." It was Carl who, while still under enemy fire, carried his best friend to the field hospital where the severe wound was dressed. It was Carl who watched his best friend die on that October day.

The war wasn't finished with Carl Filkin. He kept on fighting and according to Carl's recollections of his time in war, shared with his son William, he and a Major Mavery would often sneak across 'No Man's Land' only to return to their trenches later with a kidnapped German prisoner in tow whom they would interrogate.

In early April of 1917, as the Canadian troops readied themselves for their greatest battle at Vimy Ridge, Carl was shot in the left arm. For the better part of two days, Carl lay in a field, taken for dead before finally being rescued and removed to a field hospital where the first of numerous surgeries removed part of his left arm.

Information traveled slowly in those days, almost 100 years ago, and so it wasn't until November 15, 1917 that the Orillia Times reported that "Private Carl Filkin, son of Mr. Harry Filkin, Longford Mills, and who went overseas a year ago, last May with the Highlanders, was wounded in the left arm by gun shot. He was taken to England, where his arm was removed. He is feeling fine now, and hopes to be home for Christmas." The newspaper got the name of his father wrong, but Carl did eventually come home, minus his left arm and his best friend.

Carl took a course in accounting, saw a pretty girl playing the piano at a party and declared to a friend that he was going to marry the girl. True to his word, on May 21, 1921, Carl married that piano-playing pretty girl, Hazel Hicks. The marriage was officiated by Carl's brother-in-law Rev. Albert C. Hie.

Carl worked as an accountant while Hazel worked at home, raising their sons. They lived in Calgary, Alberta for a while when Carl was President of the Prest-O-Lite battery plant located in that city. Eventually, they returned to the Toronto area and lived in Mississauga, Ontario where Hazel passed away in 1965 and Carl in 1976.

Alex Morton never returned to Canada. He was buried in the Cabaret-Rouge British Cemetery, Pas-de-Calais, France, joined by more than 7,650 other brave heroes of the First World War. Two young heroes went to war. One did not come home; the other came home forever changed. Lest we forget!
Posted by Unknown at 7:00 AM No comments: Links to this post