A Ghost of a Chance 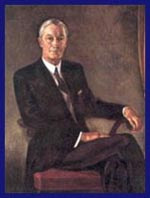 Global Television Queen's Park reporter, Sean Mallen provided an entertaining behind the scenes look at the Ontario Legislative Building in his August 22, 2009 "Focus Ontario" show (available online at http://www.globalontario.com/video/index.html?releasePID=XSJxSgVdwzOxR27eLEX1S7vPIwv741a2). He also provided me with the potential to meet one of Ellen's long deceased cousins! Part of the show focussed on the Lieutenant Governor's suite and included present day Lieutenant Governor David Onley (a classmate and friend of mine from university days) talking of the history of the suite's rooms and the reported ghosts, the most recent sighting being reported by a cleaning woman who claimed the apparition bore a striking resemblance to Ellen's second cousin twice removed, the late Hon. Louis Orville Breithaupt, Leiutenant Governor of Ontario from 1952 - 1957.
The story of Ellen's connection to the Lieutenenant Governor of Ontario starts in the 1840's when Liborius and Catherine Breithaupt moved with their children from their home in Germany to join the large German community in Buffalo, New York. A few years later, they would move again but this time north to the join the large German community in Berlin (now Kitchener), Waterloo County, Ontario. Already residing in the community was Jacob Hailer, a wheelwright, and his family as well as Jacob Wagner, a Wilmot farmer.
These three families became connecetd when Jacob Wagner married Jacob Hailer's daughter, Margaret, in 1849 and Liborius' son, Phillip Ludwig, married another Hailer daughter, Catharine, in 1853. While Jacob and Margaret Wagner (Ellen's great-great grandparents) prospered and raised thier family, Phillip (who went by Louis) and Catharine prospered through the success of thier large leather goods factory. Their success in business lead the family to community prominience and eventually to politics.
Louis Orville Breithaupt was educated at my alma mater, the University of Toronto, before becoming head of his family's leather company. He later served as a Kitchener, Ontario alderman before being elected the youngest mayor of Kitchener in 1923. In 1940, Louis was elected to represent the riding of Waterloo North in the Canadian Parliament. He served as Member of Parliament for 12 years before resigning his seat to become the 18th Lieutenant Governor of Ontario in 1952. Louis Orville Breithaupt passed away in 1960 and rests in Kitchener, Ontario's Mount Hope Cemetery or, based on Mallen's report, does he?
Posted by Unknown at 10:48 AM