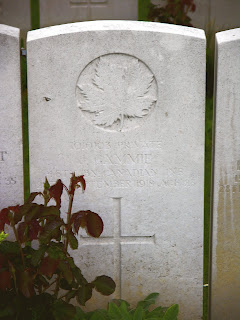 Most were just boys, really. They enlisted with the enthusiasm of youth, proud and invincible in their new uniforms. Their parents likely were frightened enough for them but proud of the young men they had raised. They were off to conquer a faceless enemy and save the world.

The training was tough and the discipline sometimes a difficult adjustment. Both were hopefully thorough in the manufacturing of these young soldiers. For the most part, none had chosen this profession, rather they were farmers, students, apprentices at a trade who would soon enough experience the terror of war.

Jimmy never returned to his farm, there was no repatriation ceremony for him. Jimmy is buried in France, with too many of his comrades, not far from the bridge he was fighting to gain. His grave, pictured above right, marked for all to remember him.

James Little Triggs was even younger, only 15 years of age and just under 5 feet in height, when he and his twin brother Phillip, followed in their father's footsteps and joined the Royal Navy as cabin boys. On May 31, 1916, James toiled away below deck so likely would not have seen the shells coming that would sink his mighty battleship and end his young life.