The Town of Berlin Becomes Kitchener 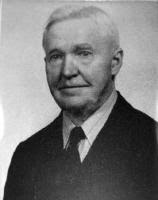 Today, August 23rd, marks the ninety-fourth anniversary of the Ontario cabinet's 'order-in-council' that officially changed the name of the town of Berlin to Kitchener. The name change became effective as of September 1, 1917. In recognition of this historic and then controversial decision, I am re-sharing a post from the past about the views and involvement of some of my wife Ellen's family's involvement in the controversy.

When the Wagners and their cousins, the Breithaupts, settled in what was originally Canada West, now the province of Ontario, Canada, they chose to live, naturally enough, in the predominantly German settlement of Waterloo County, specifically in the town of Berlin. Jacob Wagner and Louis Breithaupt married Mary and Catherine Hailer, respectively, who were the daughters of the first German settler in the region, Jacob John Hailer. The area also featured a large Mennonite community that had immigrated from Pennsylvania.

With the outbreak of World War 1, however, things changed quickly as the German heritage became the focus a growing enmity lead by non-German residents. A bust of Kaiser Wilhelm II went missing twice from Victoria Park in the centre of the town and then disappeared for good. Recruitment for the local battalion was seen as being too slow, perceived as a symptom of an unpatriotic community heritage.

In 1916, a movement began to rename the town and although it did not have popular support, names were put forward to be decided upon through a referendum. Those in favour of the name change argued that maintaining the name of Berlin was unpatriotic and bad for business. Those in favour of keeping the name pointed to the bustling manufacturing sector unharmed by the town name and argued that the time was not right to be spending time on a name change debate when raising recruits and funds for the war effort should be the focus of attention.

The opinion of the Breithaupt family, as prominent citizens of the town, was considered to be of importance. The Breithaupts opposed the name change and suffered attempts at intimidation as a result. On May 12, 1916, about a week before the scheduled referendum, W. H. Breithaupt (pictured above right), then president of the Berlin and Northern Railway, had his home vandalised by "men in uniform" who cut his telephone line and rang his front door bell repeatedly before slipping a threatening note under in front door "stating what would happen if he did not support the change of name bylaw."

On May 19th, 1916 only 892 citizens out of about 15,000 cast their votes. W. H. Breithaupt the following day lamented in a letter, "We had a citizens vote yesterday on the question of changing the name of our city, a name it has had for nearly a hundred years, and I regret to say that those who want to change won by a small majority. No new name is as yet selected." The name was subsequently changed to Kitchener in honour of Lord Kitchener, Britain's Minister of War who died when his ship hit a mine and sank off the Orkney Islands.

The Breithaupts remained a family of prominence in the newly named city and today a city park and neighbourhood bears their name.
Posted by Unknown at 10:21 PM