The Murder of Aunt Elsie? 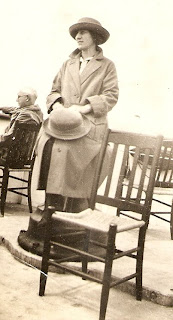 It is difficult to imagine a more sinister tale in the family saga than the murder of a relative but that is the tale that I heard about dear Aunt Elsie.

Elsie Gaull (pictured right on board the "Cape Trinity" bound for Scotland) was a younger sister to my great grandmother, Jessie McKenzie Gaull, and the fourth of thirteen children born to John Gaull, a Monymusk, Aberdeenshire dairy farmer, and his wife, Harriet McKenzie. Elsie was born on the 10th of March, 1885 at Whitehuaugh in Chapel of Garioch, Aberdeenshire. There doesn't appear to be anything remarkable about Elsie's upbringing and it is likely that she was of great assistance in helping with her younger siblings. Elsie attended school and in fact, was still listed as a 'scholar' according to census records at the age of 16.

On July 10, 1913 Elsie married William Findlater at the Temperance Hotel in Kemnay, Aberdeenshire. Sadly, it appears that Elsie was widowed just a few short years later (perhaps as a result of World War 1 although no death certificate nor registration has been found to date for William). In 1920, as Visitor #61141, Elsie, then a widow according to the ship's passenger list, arrived in Canada to join her brother George who was living at 67 Pickering Street in the east end of Toronto. Elsie and George's older sister, Jessie and the Hadden family would join them around 1927.

In May of 1928, Elsie returned to Scotland for a few months to visit her now widowed father, John. She didn't particularly enjoy the voyage to Scotland and complained in postcards she sent my grandfather, John Gaull Hadden, that the weather was rough and perhaps as a result, she didn't have much of an appetite. In October 1928, she returned "home" to Toronto, as she listed it on the ship's passenger list, where she was employed by the T. Eaton Company as a dressmaker. However, with her father's health beginning to fail, Elsie again returned to the Gaull family farm at Cairnley in Monymusk. Her father, John Gaull passed away in July 1942 and this is the point in which the story takes a sinister twist.

Elsie, a widow, alone on the farm, was pursued according to family lore by a 'gold digger' who convinced poor Elsie to marry him only to then be murdered by the wretched man in order for him to gain possession of the prized family property. A compelling tale of intrigue - if only it were true!

Following her father's death, Elsie did re-marry in 1945 to George Duncan and she did predecease George, passing away on October 17, 1952 but rather than being murdered, Aunt Elsie's cause of death was a heart attack.
Posted by Unknown at 7:16 PM