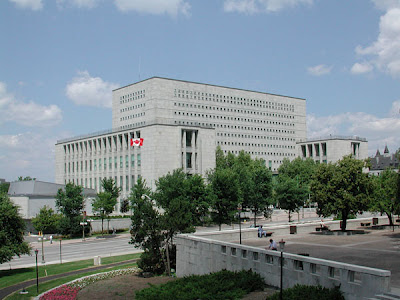 Warning: This post contains personal opinion.
There has been a lot of effort by Canadian librarian associations and genealogical societies protesting the budget cuts at Library and Archives Canada (LAC). Understandably these organizations have a vested interest in the debate. Librarians and archivists, represented by their associations, will fight to save their jobs. Genealogical societies will fight to maintain current service levels and urge expansion and ease of accessibility to record collections.
Unfortunately, in my opinion, they are missing the some of the important elements of a solid argument against the way in which the budget cuts are implemented. While I agree with these various groups that the cuts don't make much sense, the rhetoric being used doesn't make much sense. The Canadian Association of University Teachers website states that the cuts will be "devastating for preservation of Canada's history" while the Ontario Genealogical Society has urged clear change in legislation pertaining the LAC's mandate, the restoration of services, and exploration of funding models to support LAC.
I want to be clear that I do not support the manner in which the budget cuts at LAC are being implemented. Government budget cuts in this era of austerity have become the norm. I am not an economist so I won't offer any Keynesian-like opinion on the benefits on austerity measures in recessionary times but as a career public servant (now retired), I can see through some of the 'bafflegab' language that the government and LAC have been using.
First, archives are not held in high place in most government circles. No one seems to know where they fit. Are the archives a cultural entity or are they simply an administrative body, tasked with preserving government documents. This 'debate' is central in my view to the Canadian federal government relationship with LAC and plays out in a similar manner in Canadian provinces. Would I like to see LAC expand it's collection of the documented memory of Canada? Absolutely. Is it likely to ever happen? No, it's just not really feasible due to both cost and space limitations. The exploration of alternate funding models has been occurring for years at LAC and at other government agencies and departments who find themselves in a catch-22 when faced with ongoing budget pressures. New revenue sources can be found but the funds necessary for the infrastructure to establish those revenues is never available.
My concern for LAC is the manner in which the budget cuts are being implemented. Plain and simple, they don't make much sense to me. For example, Daniel Caron, the Librarian and Archivist of Canada, essentially the head of LAC, has been quoted as noting that LAC is moving forward with a greater digital presence, pointing to LAC's new Facebook and Twitter presence. Mr. Caron however likely cannot explain how 899 Twitter followers and an meager 283 Facebook followers gives LAC real bragging rights. This all falls under the bureaucratic umbrella of something called 'modernization.'
LAC has noted that in-person visits have been declining while website visits have been escalating. It would seem obvious then that the future lies in greater accessibility to the records of LAC through it's website. I can fully support such a direction. Not everyone can travel to Ottawa, Ontario to make an in-person visit. Online records access makes sense and many private companies (such as Ancestry) are showing that it can be profitable. Mr. Caron and LAC have not explained to me how cutting 50% of the digitization staff is going to achieve this end result. The LAC website states that LAC provides "Democratic access to your nation’s records – at the speed of light. Any time of day or night" following an explanation that LAC holds 20 million books, periodicals, microfilms in addition to 3 million maps, 24 million photographs and 350,000 hours of film, portraits and musical items.
I don't have access to all of that material "any time of day or night" but I would love to enjoy it. The cuts this year to the LAC budget are likely not the end of budget cuts but nor are they likely the first budget cuts that LAC has experienced. With each passing year, the LAC collection deteriorates and the "democratic access" to my nation's records goes unfilled. The secret to a successful business for LAC lies in that reality.
The URL for this post is: http://ianhaddenfamilyhistory.blogspot.ca/2012/07/i-interrupt-this-family-history-for.html
Posted by Unknown at 4:57 PM